A major change is the inclusion of warning labels​ on health food packaging, where it must now be displayed in this format: “Health foods are not drugs, and cannot replace drugs to treat diseases​.”

The warning labels are to occupy 20% or more of the main display area of the packaging, and the fonts are expected to be in bold.

Complaint hotline information (number, and service time) shall also be marked on the labels of health foods, and the fonts are expected to be consistent with the font of the health function.

The product’s expiry date will also be presented as YY/MM/DD, instead of ‘the product is valid for XX months’, following feedback from consumers.

SAMR hopes that with the new guidelines, it can help consumers more easily distinguish between health foods from normal foods and drugs.

Cathy Yu, senior food regulatory consultant and GM of the food business division at Chemical Inspection and Regulation Service (CIRS) told NutraIngredients-Asia​: “All the health foods produced after January 1, 2020 shall comply with the new regulation on labelling. But the health food produced before January 1, 2020 could use the old label within the quality guarantee period​.”

Although SAMR had not mentioned a transition period, CIRS believes that the products produced before January 1, 2020 would be allowed to be sold until it reaches its expiration date.

Yu also expects the SAMR to conduct more public consultation concerning health foods in the early half of 2020.

One of the anticipated public consultation concerns the functional evaluation method of health foods.

“China has been amending the health food regulations over the past years and has made great progress to promulgate some of the updated regulations.​

“We believe there will be more regulations related to health foods released by the government in the near future​,” Xin Li, senior regulatory counsellor at Keller and Heckman LLP Shanghai office said.

A key development to take note of is the relaxation of laws pertaining to the use of the “Made in Australia” claim.

Just before the end of last year, there were changes made to the Australian Consumer Law (ACL), which will in turn allow the complementary medicine industry a greater access to the use of the "Made in Australia" logo.

Previously, there was a tightening of the rules that penalised companies which imported ingredients in certain formats, and Nature's Care ​was an example of the affected companies.

On the other hand, the sports nutrition regulatory framework in Australia is expected to see an overhaul this year.

This is to stem the sales and consumption of illegal and adulterated products.

In response, CMA had urged​ the regulator to conduct an impact assessment of the proposal, as the proposed changes could put heavy financial burdens on manufacturers.

One of the biggest regulatory changes in Thailand that will shape the sector this year is the approval of CBD and hemp use in herbal products.

In response to queries from NutraIngredients-Asia​, Alan Adcock, partner and deputy director of intellectual property at regulatory consultancy Tilleke & Gibbins, said that herbal products generally covered nutraceuticals and cosmeceutical products, as well as traditional medicines based on herbs.

“Each product will need to be accurately classified based on whether the product is THC or CBD because each has different requirements,”​ he said.

Secondly, he advised firms to plan ahead the types of products that will be manufactured and set up their corporate structure accordingly.

Thirdly, firms should not only be mindful of the end-product, but also the initial handling of raw materials.

He pointed out the example of dry hemp. Though it is free from regulation, it is however, created from regulated raw materials.

“Given that cannabis has been banned in Thailand for the last 40 years, Thailand needs to keep up with the breeding of local strains and the state of the art of cultivation and extraction.​

“​Interestingly, Thailand has its unique knowledge of medical marijuana in the form of traditional medicine formulations, which the relevant academics and regulators are seeking to modernise,” ​he concluded.

Staying in Thailand, the authorities have now allowed the addition of new nutrient claims​.

Manufacturers that want to display a nutrient claim should ensure that that particular nutrient must meet 10% of the Thai Recommended Daily Intake (Thai RDI).

In South Korea, the plan to allow health claims in general foods has garnered enormous interest from the industry and consumers alike.

The South Korean authorities gave the green light for implementing some functional health claims on general foods last year, following the enactment of the Enforcement Decree of the Act on the Labelling and Advertisement of Food.

Kasbekar said that the authority was planning to issue three steps, which would allow processed foods to bear certain health claims.

The listed HFF states the specific number and types of ingredients approved as HFF.

She said that as part of this new plan, the South Korea's Ministry of Food and Drug Safety (MFDS) would allow processed foods containing listed HFF to bear health claims.

However, as of now, she does not expect dramatic changes to the food and supplement industries.

On the other hand, the country’s MFDS also sought a two-week public consultation regarding GMP standards of health functional foods in November.

Earlier this year, the Food Safety and Standards Authority of India (FSSAI) and the Ministry of AYUSH announced that they would be working on possible standards​ for Ayurvedic Aahar, the traditional Ayurvedic foods which may form either part of the current food supplements and nutraceutical regulations or as a separate set of regulations.

FSSAI is of the view that given the longstanding tradition of Ayurveda foods in the country, this segment should come under the purview of food regulation. However, such products cannot make therapeutic claims as applicable for Ayurvedic medicines.

FSSAI executive officer Pawan Agarwal told media​ at a Chamber of Indian Industry (CII) event: “Our team is working with Ayurveda Ministry so that we can bring that Ayurveda Aahar ecosystem in place including a separate identification mark for it​.”

He ruled that India had not been able to build a food supplement market based on botanicals using Ayurveda because the Ministry of AYUSH was treating Ayurveda as a medicine, where in fact, it is present in various foods.

According to Dr Rashmi Kulshrestha, founder and CEO of consultancy firm, Regulatory Wisdom, one example is Chyawanprash. “It is the most popular Ayurvedic proprietary medicine but it is commonly consumed as an ayurvedic food for promoting immunity functions​.”

"This category will grow when there is a regulatory clarity on this. Currently there is a lot of ambiguity around it. They go by Ayurveda pharmacopeia etc (and) we are working on it​,” Agarwal said.

Agarwal said the process had been delayed but added that a decision on the standards would be made in the next few months.

He added that developing these standards would positively affect not only the Ayurveda industry in India, but also globally.

"We want to create a brand for Ayurveda Aahar in India and internationally​," he said.

Ayurveda has been increasingly taken up by international consumers, as they become more aware of the natural benefits of traditional medicines compared to chemical drugs, higher disposable income and growing e-commerce in the country.

Another important information for domestic and international manufacturers to take note when selling supplements in India is the increasing demand for natural, vegetarian supplements, and supplements with ingredients which are traditionally used, Kulshrestha told NutraIngredients-Asia​. 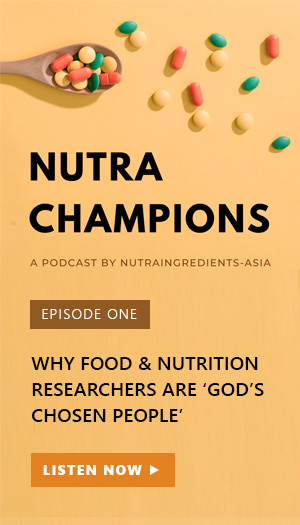